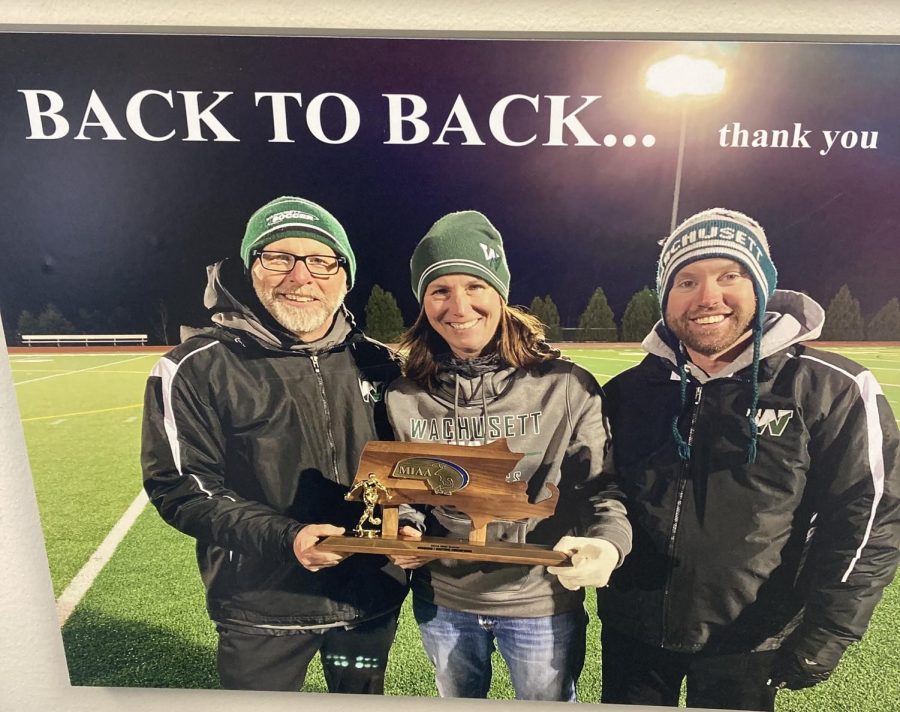 Triumphantly, (from left to right) Mr. Gentleman, Ms. Lynch, and Mr. O'Malley pose with the girls' soccer trophy after another successful season.

Over the past nine years, the girls varsity soccer team has only lost 26 games. But this fall, they will be dealt the toughest loss yet.

Coach David Gentleman has decided to retire as the head coach of the girls varsity soccer team.

“I can’t imagine not being involved in soccer at some level at some time in the future. I just love the sport so much,” said Gentleman.

Gentleman said that sports have a bigger meaning behind them as they create opportunities for younger generations to grow into well-rounded people.

“Sports are as important as any other extracurricular activity. They can teach self-discipline, teamwork, and confidence,” said Gentleman. “Sports are a metaphor for life.”

He also acknowledged the similarities between coaching and his profession as a pastor.

“The ideas of being a coach and a pastor are the same – you try to help people find or be the best part of themselves,” said Gentleman.

Gentleman said he has many fond memories of the girls soccer program.

“Being the coach on a team that won back-to-back State Championships was one of the best experiences for sure. But I think it was just the privilege of coaching some amazing student athletes over the years that was the most rewarding,” said Gentleman.

One of his State Championship players, senior Jillian Stone, said she noticed how much impact Gentleman’s coaching style had on the athletes.

“Instead of putting soccer first, he put us first. He always checked up on us and made sure we were okay. He was obviously a very good coach for soccer, but he put us first, which made him a better coach in my opinion,” said Stone.

Stone also said that she learned valuable lessons from Gentleman.

“He taught me the values of teamwork and what a team really was. He was also always honest with us,” said Stone.

His inspiring team talks instilled confidence in Stone and her teammates. But most importantly, Gentleman made his players feel valued.

“Every single time we would have a team talk he would always say you are amazing, beautiful women, who are going to change the world when you are older,” said Stone.

As a ninth grader, Stone said that Gentleman intimidated her. But as she started to play for him, she learned his true character.

“Freshman year when I went to the auditorium and he gave us the speech that not everyone was going to make it, I was petrified. I was so nervous that I wouldn’t get onto the team. But once I got on the team and talked with him, he was the complete opposite. He was the sweetest guy ever,” said Stone.

Another one of the State Championship players, junior Emily Raymond, said Gentleman left an impact on her life as well.

“He was really big on not just women’s rights, but empowering women. He would bring it up all the time and at first it didn’t hit me, but after a while it stuck with me,” said Raymond.

She said Gentleman built up her confidence back up after a tough game, where she hadn’t played to the best of her abilities.

“He put me in one playoff game when I wasn’t expecting it. I was nervous and he started me in overtime my sophomore year because I had a really good game. I got really nervous and I wasn’t playing very well and he took me off the field and he was like ‘Em you’re an amazing player, you can’t get in your head when you know what you are doing,’” said Raymond.

Additionally, she said Gentleman as head coach created a strong foundation for the girls soccer program.

“Whoever steps into his shoes will have a tough time and they will never fill his shoes completely,” said Raymond.

Even though Gentleman helped the girls varsity soccer team succeed for the past nine years, he said if he had more time, he would change one aspect of his experience.

“There are always things you can change when you have the perspective of looking at what you have done. But while it was happening I tried to do the best I could,” said Gentleman. “I suppose the one thing I would have liked to change if it was even possible, was to slow time down and enjoy it even more while it lasted.”