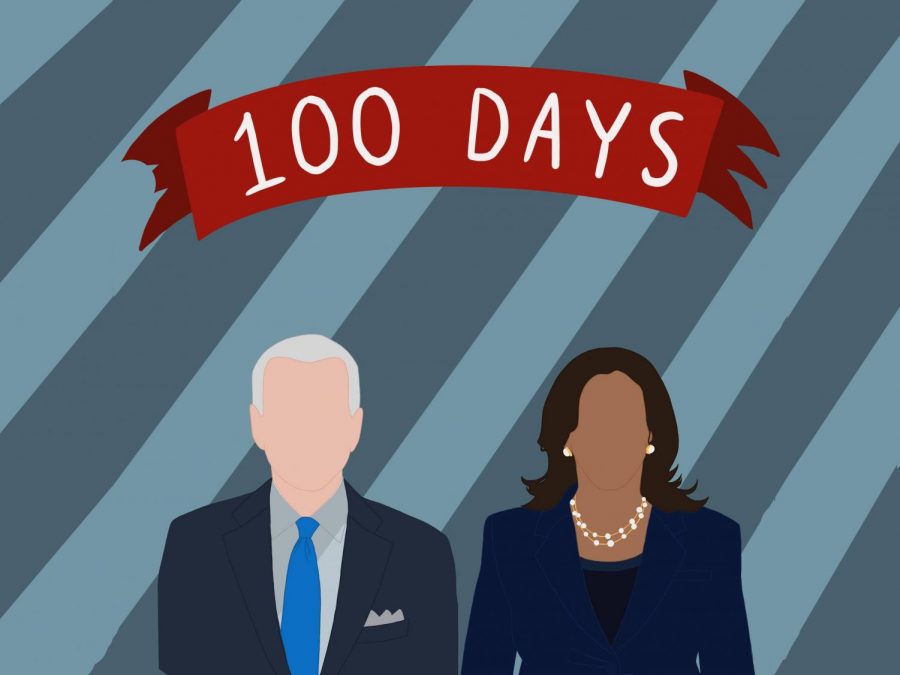 Thursday, April 29, marked 100 days since Joe Biden’s inauguration on January 21, 2021. The 100 day milestone, entered into political discourse by President Franklin Delano Roosevelt during one of his famous Fireside Chats, has become a significant date for every subsequent administration.

“When Roosevelt took office, the Depression had been sinking the country deeper and deeper and there had been a long wait between his election and inauguration because the date of the inauguration was not what it is today,” said History teacher Angela Colwell-Arbour. “He [FDR] immediately started talking about pace and working quickly once he was elected to ease the public’s mind.”

According to FiveThirtyEight, a website that aggregates nationwide opinion poll data, broadly speaking Biden’s presidency has been less divisive than Trump’s, with a 53.4% approval rating 92 days into his presidency, compared to Trump’s 41.9% approval rating during the same time. Comparatively, Barack Obama had a 60.2% approval rating at the 92 day mark.

Students remarked on the divisiveness of the current political culture.

“The current climate is very divided and partisan. People are extremely attached to just one side and see each other as enemies,” said Freshman Nicholas Smith.

Biden made vaccine distribution the primary goal of his early presidency – a goal that he has been able to achieve.

“Biden promised a lot of vaccines quickly and hit the mark,” said Colwell-Arbour.

“I think he [Biden] has done very well because he bought many many vaccines for the U.S. that are being distributed successfully. He also passed a pretty big stimulus that had a lot of benefits in it.”

“There is a lot of pent up demand right now, which will cause economic growth as people get back to going out and spending money.” said Business teacher Janet Foss-Deluca. “However, Biden’s plans to raise the corporate tax rate and capital gains tax will likely cause a downturn in the future. Although, since it is so early in his term, these are all projections.”

While most students thought positively of Biden’s coronavirus actions, some Mountaineers expressed criticisms for other areas of his administration.

“I think he’s been kind of hit or miss… He has kind of done well with obtaining vaccines and passing the stimulus bill, but he hasn’t done well with treating immigrants at the border,” said Smith.

Biden has certainly faced challenges at the southern border, struggling to find space to accommodate the massive influx of refugees and asylum seekers who have journeyed there since the beginning of his administration.

“We have a real surge of immigrants coming across the southern border because they feel like Biden’s administration is more welcoming,” said Foss-Deluca.

For many students, the most notable change in the first 100 days of this new administration has been a marked change in tone.

“When Trump was president I was hearing a lot of bad things that conflicted with my values,” said freshman Aiden Cirillo. “The absence of that is the thing I notice the most.”