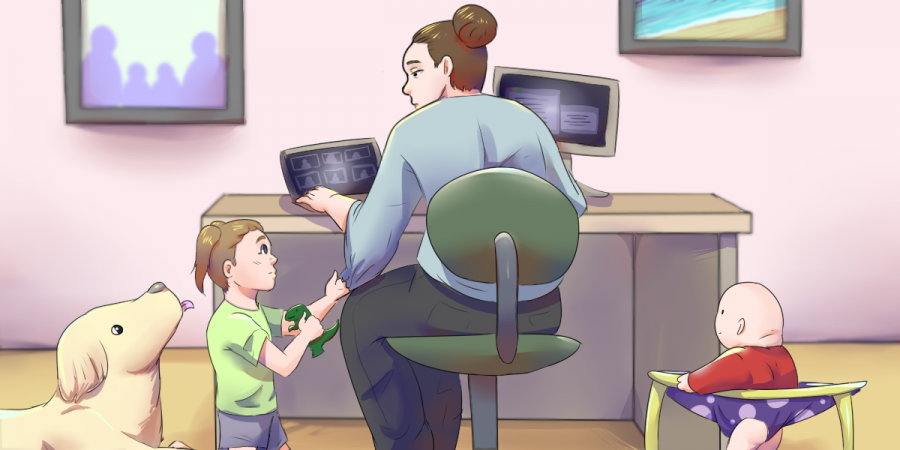 Last spring teachers and students ventured into the unknown territory of remote learning. On top of that, many educators had to deal with supervising young children.

English teacher Sarah Lefebvre, mom to her six year old and two year old daughters, said she realized daycare would be the only option for when school began in September.

“Anytime I would try to teach in the spring with my two year old at home, she wanted to sit on my lap. There was no way that would work in the fall,” said Lefebvre.

History teacher Nicole Finney said she, too, struggled to teach during the fall on the rare occasions her two year old son and newborn daughter could not attend daycare.

“In the spring there was no daycare. But once they opened back up in the fall I was lucky enough to be able to get them in. On days that the kids were home my students would probably see or hear them on the zoom calls,” said Finney. “Without the daycare, teaching would have been impossible.”

“It was really difficult for my daughters. It was incredibly hard to maintain their attention. I would go upstairs and my second grader would be on Youtube, watching BTS. It was very hard balancing being a good teacher so I could be the best for my students, but then also being the best for my family,” said Buraczenski.

Students, including Carter McRell, faced the problem of staying focused on school, while being stuck at home.

“In the fall when we were all at the house doing work, it was tough. There were wifi issues, there were not enough devices for everyone, and my parents would interrupt me in the middle of my classes to ask if I could watch one of my sisters,” said McRell.

Teachers, along with students, faced challenges with the immediate shift into remote learning.

“It was definitely a big adjustment to make, from trying to adapt to virtual lessons and figure out how to still get kids engaged or conduct discussions over a Google Meet or Zoom. Even just making connections virtually with students was a lot different. Many students I never saw their faces outside of their Google avatar,” said Lefebvre.

Like most teachers, Finney’s normal teaching style before the pandemic happened to be largely based on student interactivity, so remote teaching posed a problem.

“In a normal year of teaching, I like group work, hands-on activities, and movement in the classroom,” said Finney. “It was so difficult to make learning fun for my students. In the spring the biggest challenge for me was not getting the human interaction and not being able to see my students’ faces.”

English teacher Brian Lux said he faced the same lack of participation in classes as Lefebvre did.

“I noticed myself assigning more independent work, but I was always still there to help my students with questions. It was hard because they couldn’t work in groups like they would in school because no one talked in breakout rooms when I set them up. It was much easier for kids to hide behind the screens,” said Lux.

Both Lux and Buraczenski shared common frustrations about remote learning.

“I understand how difficult it was. Everyone reached the saturation point, which happens every year, but the pandemic made it worse.  However, teaching would have been infinitely better if the students had met their teachers halfway,” said Buraczenski.

From a student’s perspective, McRell addressed the fact that the remote learning expectations at the beginning of the pandemic changed drastically in the fall.

“During the spring we only had two hours of work a day and maybe a zoom call every other day. But in the fall all our classes were scheduled and there was no more pass or fail. It was a big jump,” said McRell.

“When my sister came home from college it was a little bit harder to stay focused because we shared the same room. She would also be doing school in our room,” said Grimes.

Although the pandemic tremendously changed normal life, it gave teachers the chance to spend more time with their children.

“It has been nice being home for this chunk of my kids’ lives that I would not have had in a normal year.  Even though my wife spent most of the day watching our son, just popping down for lunch or taking a ten minute walk in the woods with him was nice,” said Lux.

For the Buraczenski family, the implementation of remote learning and teaching has been the silver lining of the pandemic.

“During a typical school year my husband does mornings and I do nights, but because of the pandemic now the kids see their dad a lot more.  The best part of the pandemic has been having family dinners every night,” said Buraczenski.

As an expectant mother, Finney also enjoyed the relaxing time she got to spend at home with her family.

“The best part about the spring was spending even more time with my son and husband. We got to experience so much more quality family time,” said Finney.

“It brought my family closer together. We would play games together during the spring because we couldn’t go anywhere.  It was nice because we wouldn’t normally get to do that,” said Grimes.

When it comes to family bonding the pandemic happened to be a win-lose situation for McRell.

“With our mom being a healthcare worker, she actually had to take on more hours, so we didn’t get to see her as much,” said McRell. “But in some ways, it brought my sisters and I closer, along with our dad. I also connected better with my sisters.”

In spite of all the troubles, Lefebvre said that watching her six year old trying to learn on the computer, helped her better relate to her students.