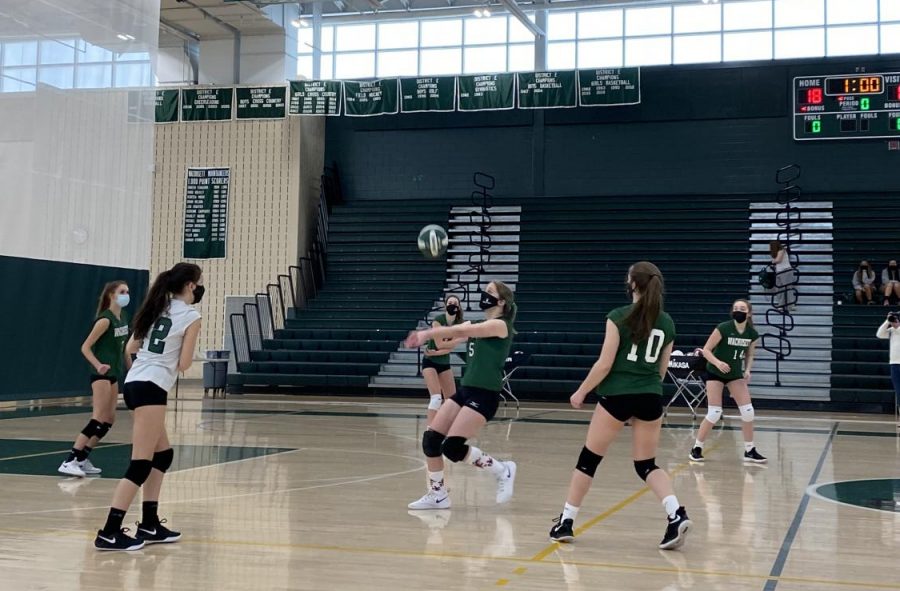 Wachusett number 5 getting ready to bump the volleyball.

Bump, set, spike – words traditionally uttered in the beginning of this school year – rang out instead months later when the volleyball teams began competing in the new “fall two” sports season.

“The change in start date [for the season] did not impact the team’s mentality,” said senior Delainey Witt. “We were just grateful to be able to step on the court to do what we always do.”

“We did not need to motivate them at all, because they were already motivated, and had tons of fun,” said Taylor. “They looked forward to practice and competition.”

Players said that playing on the team ended up being the best part of their day.

“I longed for a sense of normalcy, and when volleyball season began, that’s all I looked forward to,” said senior Sabrina Zhou. “The excitement of walking into the gym with my teammates and working hard was the only bit of normalcy this year.”

But this season proved to be anything but normal for the volleyball program.

“In a typical year preparations for the next season begin the day the season ends,” said physical education teacher and varsity girls volleyball head coach Jen Burton. “But this year there was not as much preparation. It wasn a lot of anxiously waiting and just hoping to have a season.”

Usually the team discusses the goals for the upcoming season, as well as the idea of trying to play as much volleyball as possible in the off season.

“As a coach I feel we [the coaches] need to stay educated on the game as well, so we always try to find clinics to attend,” said Burton.

But that schedule – as well as other traditions – did not happen this year.

During their season, the volleyball program always holds a Dig Pink game to raise money and awareness for the Side-Out Foundation for Breast Cancer. Due to COVID-19 protocols, this game could not be played.

“It was disappointing, because it’s such a fun event, and a great fundraiser,” said senior Riley McNamara, who works the table at all home volleyball games.

According to the coaches, although the pandemic changed many aspects of this season, the essence of the game remained the same.

“There were a lot of protocols and uncertainties with the schedule, but it was still just volleyball,” said Taylor. “It was just volleyball with a mask on.”